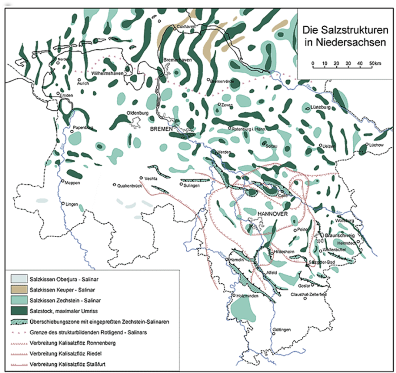 A huge potential for the further expansion of storage volume is in Northern Europe, as shown above. The most salt domes are in the region, where the most wind power is produced, so that the expansion of the North South distribution could be reduced through a storage.

Salt was deposited from precipitation in large shallow oceans during hot times in earth age. The salt was then buried by other sediments and can now be found at different depths in salt layers or as salt domes. The areas where large basins with considerable salt deposits can be found is shown below. Salt caverns can be leached in suitable locations in these basins.