It is well known that the production of electrical energy by photovoltaic and wind turbines is subject to strong fluctuations, not only in the course of the day, but also seasonally. In the graphs below, this is shown for one week in December 2017.

The share of wind power is relatively large, while photovoltaic makes only a small contribution due to the shorter days.

During some days, the share of renewable power is 80% of the total demanded power. The rest is supplied by power plants fueled by fossil fuels or nuclear power. The share of negative imports, i.e. electricity exports, is remarkable. At times, these exceed the share of fossil energy sources, which means that, theoretically, Germany's entire electricity demand could be covered by renewable energies.

Electricity generation in Germany - power with respect to soure in percent 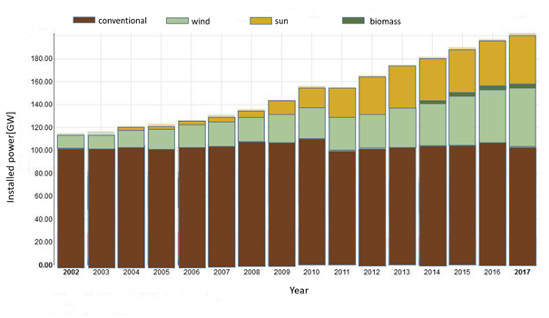 As shown above for one week in December, this could cover the entire electricity demand if the fluctuations could be balanced out.

Providing excess capacity and shutting it down, on the other hand, is not a good idea. Who hasn't seen them, the wind turbines that are turned out of the wind on the coast in a stiff breeze and stand still. The wind miller is rather not interested in electricity storage, because he gets paid for the electricity (phantom power) he could generate, regardless of whether it is needed.

(Figures based on data from the Fraunhofer Society)